The second homeschool technology lesson was largely a reminder of the first – I reviewed binary. I wrote on the “board” (iPad connected to a TV) decimal numerals…

Q: For base-5, what does the first column go up to?

Q: For base-8, what is the second column worth?

Each column in base-10 from there is ten multiplied by the previous column. So the second column is 10 times the first column number (1): 1×10=10.

Then we did some addition…

That was the homeschool technology lesson 2 for more binary. I want to really drill this foundation home before moving on. Once we have this down with review and practice, I’ll probably move on to hexadecimal and ASCII. The on to how computers store files and such.

Side note: When I was first learning computer science, I learned from reading manuals that 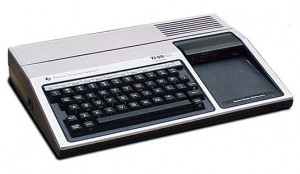 came with my TI-99/4A with Extended BASIC. I’d read about a BASIC statement (e.g., if-then) and then write something using it.