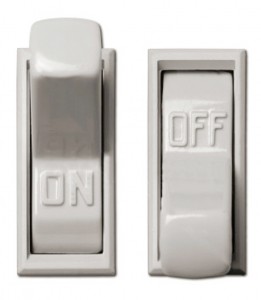 I did the first homeschool technology lesson today. I don’t know if I’ll be able to post many and I don’t expect it will be too verbose, but here goes…

I started by showing the boys a light switch and talking about on and off. Those are 2 ‘states’ of the light switch. It can only be one or the other. I talked a little about how the switch works on the inside: when the switch is on, the connection is made and the electricity can flow.

Then I asked about other things that can be one thing or the other: eyes open or closed, day or night, etc.

Then I asked if they could find other on/off switches in the room. They found things like a lamp, TV, etc. I focused on an on/off button they found.

I pointed out that the symbol on the on/off button has a circle and a line on it – a zero and a one. I asked which they thought the zero represented (off) and the one (on). 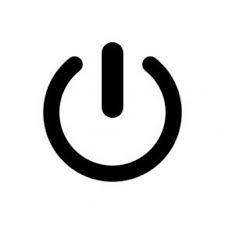 Electronics have 2 states: on or off, zero or one – that’s digital and that’s the core of binary.

Two things people tend to have a hard time with is 1) that base-10 numbering isn’t the only number system and 2) one is not the first number (Spoiler: zero is – zero is first, one is second, etc.).

My older son asked about a counting system where things double. I said “That’s binary!” We used to double things a lot and I explained it’s binary. Apparently it stuck a bit.

So read it this way…

Of course another way to say it is…

“So in binary one is one, two is two…” – They’re the same values so you’d say the same thing.

It works better if you understand and can explain it. In this post I feel like I’m explaining it and explaining how I explained it and it just sounds terrible. 🙂

There was a lot of interruptions and confusion. I don’t expect them to completely get it the first time, but it’s planting seeds. Also, there was a lot of drawing on the board of the on/off button and binary stuff.

I tried to make it a combination of fun, applicable (switches around the room) and the basis of knowledge – binary is how data is stored in a computer: files, images, video, games, etc.

The intention is to build on that to explain how computer memory (RAM, hard drives, DVDs, etc.) stores things with tiny switches or other way to show on/off (binary). Those value add up to values which represent numbers, letters, etc. and everything else stored on a computer: music, video, games, etc. All based on 0’s and 1’s.