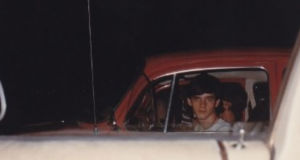 My first car was a 1974 VW Super Beetle. Super Beetles have curved windshields. There’s other cool facts in the evolution of VW Bugs. It’s a fascinating car all around.

Ferdinand Porsche designed the VW Beetle for Hitler (the “people’s car”) and it was his dream car. Mine too. Maybe it appeals to my practical side – when you get into the details of this vehicle, it’s really amazing.

For one thing, it floats in water – it’s air tight and floats! Also, it’s an air-cooled engine (like later Porsches). It’s actually, technically an airplane engine. The Beetle is the longest-running and most-manufactured car of a single design platform, worldwide.

My parents had one when I was very young and my mom had a 1978 Champagne Edition convertible Beetle – the last year they were manufactured (outside of Mexico). I loved them all!

When it was time for me to get my first car, I wanted one… BAD! I lived in a small town, but they were still obtainable. I met a guy who bought one that needed work. He and his dad fixed it up and it was in pretty good shape when I bought it from him for $600. It was 1986 when you could buy a car in the “hundreds.”

It had some issues but I met a guy down the street that used for have a shop and worked especially on Beetles. He helped a bunch over the course of this too-short chapter for my car ownership story.

One time, a friend and I were driving back from New Orleans – what in the world made me think we could take it that far away? It was leaking oil bad and I’d have to stop pretty often and pour more oil into it. First car.

We were on the Causeway bridge and I pulled over in the middle to put more oil in. I opened the engine lid and a curtain of oil parted to reveal a smoking, black-oil covered engine. What did I do? I poured more oil in and drove the rest of the way. Different times.

Among other things, a gasket had broken. How do you fix a gasket you ask. You take the torn one, covered in oil, place it on a manilla folder, and then cut out the new gasket. You don’t have to leave the old one on the folder b/c the oil from it produced a perfect template. Different times.

Another time, something broke on the front, driver-side drum. I went to the dump, got a new one and replaced it. It was parked at a friends house over night and I had to fix it before school. I sat in his parents’ driveway, in the dark and replaced the drum by touch. I remember his dad coming out to go to work and walked right by me without seeing me. I really could have scared him.

Why was I so bold and courageous in working on my first car? Maybe because it was the equivalent of a large go-cart. There wasn’t much to it. And pretty much everything about it was visible. I can see that this part is broken. I can see this one from the junk yard isn’t broken. Screw off the old one. Screw on the new one. Drive. Different Times.

Not that I’m working on the engine – so the simple stuff, I can do.

I also used to maintain my VW Bug. That just meant oil changes back then. It had a weird system – probably better. Basically there was a plate with four bolts. You unscrew the drain plug, drain it, then unscrew the bolts to rinse off the oil filter. Yep. Different Times.

One of my bolts strips the hole it screwed into and it was leaking oil. No problem. I know how to fix cars apparently. Bore a new hole.

Boring a new hole meals you get a larger drill-like bolt, drill out a larger hole in the stripped hole and then use a larger bolt from then on. I can do this. I probably shouldn’t, but I want it fixed. Now.

Turns out, the new bolt is longer than the old bolt… which I’m not comparing anymore.

Well, the crack I heard was the crankshaft. Right in the middle of the ever-feared engine. There I can go no further.

So now, my first car won’t start and no money to get it fixed. This is the kind of problem where you need someone who wants this car and can fix it himself. It would cost more than it’s worth (at that time) to pay someone to fix it.

So I sold it for $250 and watched them tow my first car away. Very sad.

I went back to riding my motorcycle all the time. A motorcycle is pretty cool, but so limited. You really can’t ride with others. Even if you tried, do you have another helmet? With you? It can be hot, cold, rainy, etc. I’d ride to school in the winter and it seemed like it took ten minutes to fill up my locker with my coat, gloves, hat, etc. I missed my VW Bug.

A few years later, in 1990, I moved to Texas and got a good job. I bought another VW Bug, but it wasn’t the same. Now I lived in more of a ‘city’ and had to do more serious driving: over here for work, over there for college, etc. The Bug wasn’t really the road warrior I needed.

I still get a kick out of seeing old VWs. I saw a really nice red one the other day. I was tempted to stop and go look at it. I was a little afraid the people might be a bit scared to see me going up on their long driveway (a bit out in the country).

There was a white convertible for sale the other day near here. I didn’t stop to check on it because I didn’t want to be tempted to buy it.

The idea of getting an old Bug is cool, but I’m realistic enough to know it would be expensive to buy, expensive if it needed any work, not super practical with little kids (not that my ’99 Jeep Wrangler is practical) and ultimately could be a disappointment. Maybe not.

I do love my Jeep now. It’s a great reminder of the Bug in many ways. It’s even red.

Sometimes there are things that workout both in what is really cool and also just right for the time. That first VW Bug was just right for me at the time. I didn’t need a commuter car. I didn’t have a family to drive around. It was that Summer romance that lives in the romantic dreams of your memories.

Maybe my Jeep will be that someday. Maybe other things will. Maybe the stars will align again and it will be the right time for another one.

I’m still sad I broke my car. I know I was being impatient. I do that a lot. I’d rather risk a likely fail than wait. I’d almost rather fail than wait. So many times I just want an answer and I’d rather hear no than wait for the possible yes.

I’m trying to be more patient. Occasionally I am. It helps if I try to look at the big picture. If I can see beyond RIGHT NOW, I usually get a bit more relaxed about it.

It reminds me of when a new iPhone or big movie comes out. Why do I want it the first day? I want it today! If the release date was a week later, I wouldn’t even consider getting it today.

It also helps to count my blessings. If you see the news today or even your friends social network feeds, there’s so much that can happen. When I think about all I am blessed with, I can more easily calm down about getting a new gadget right this minute.

As I type this, I missed the delivery of the new iPhone yesterday. I was out and could have come home in time for my wife to pick up the boys from school. I decided I’d be a big boy about it and not let the anxiety and fear dictate my actions. All the while, I’m constantly hitting refresh on the delivery status page. Sure enough, they tried to deliver it right after my wife left.

And I was a big baby about it. It said they would try again. Today? When? Come back! As I drove home about an hour later, I looked down each street to see if I could see the UPS truck. I had my current phone in my lap – I put it in my pocket in case I need to jump out and wave down the driver. Really?

Was I really going to pull over and try to flag down the driver? Oh, yeah. I even thought through how I’d prove to him they’re mine. No problem. Driver’s license.

I didn’t actually drive down each street. I mean, I’m not ridiculous. Really?

When I got home, the note said they’d try again today between 2pm and 5pm. It’s 3:12pm and every time a car drives by I look out the window.

I’m excited about a new toy. That’s fine. That’s even good. It would be said if I was getting a shiny new toy and didn’t care. But I should blend excitement with impatience. Then not only does it ruin the fun, but it can even become a negative when anything other than perfection takes place.

So hold loosely possessions and focus on the big picture. Be excited for the good, fun things, but be patient during the anticipation.

It makes me think of my stance on surprises. If you’re going to surprise someone with something fun (trip, date, dinner, etc.), why not tell them ahead of time so they can also look forward to it before hand too? I don’t mean always tell people and never surprise them. But I know if I were taking my wife to the beach for a trip, she’d want to know as soon as I did so see could look forward to it for as long as possible.