Last week and friend of mine and I went to check out the Gas Monkey garage in Dallas. Afterward, we went to the Gas Monkey Bar and Grill for dinner and to see Cornmeal play.

My friend’s brother is a big Gas Monkey fan so we went to get him a souvenir and just generally check out the garage. There’s a cool van out in front of the Gas Monkey garage gift shop. 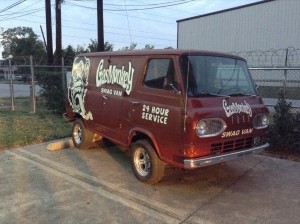 The gift shop was just closing unfortunately. The gates were open so we just walked back to the garage. A guy came out and I asked about going in the garage. He said he’s with the show but pointed out a bunch of Gas Monkey garage guys in the back.

We got some pics through the windows of a bunch of really cool cars.

We walked back into the garage and there was a bunch of guys eating. I would have walked up to them, but I have only seen the show once and didn’t know any names.

We did see Aaron Kaufman drive up and walk in. I recognized him but didn’t know his name.

A guy from the group walked out to us and was very nice asking how it was going and such. He asked if we were from around there and such. Very nice guy. Not sure who he was. He politely said that the gate (which said “No entry. Filming in progress”) should have been shut.

He walked us out and shut the gate. He was genuinely very nice.

We went to the Gas Monkey bar and grill. My friend got the brisket grilled cheese which I tried and was very good. I had already eaten so I just got a side of the green chile cheese grits. They were great, but it was a small side. That’s fine, but generally everything was quite pricey.

The opening act was Straw Hat Society – well, it was two of them. It was a last-minute thing and the other guys couldn’t make it. 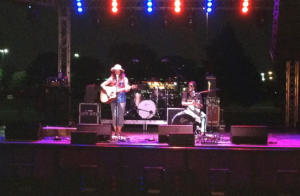 We hung out w/ them for a bit afterward – very nice guys. I dig their style.

After that, we saw Cornmeal and they rocked it out hard. That’s about all I can say. They played their hearts out and made at least 2 new fans. 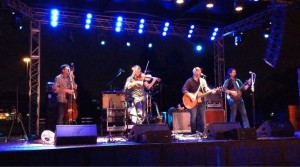