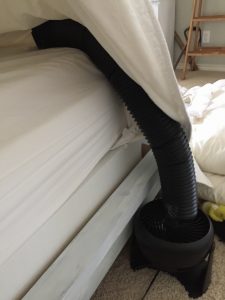 No need to explain the reasons for this. If you’ve found this site, you get it.

I tried a couple routes first and won’t bother explaining the failures (mostly related to fan issues and I don’t want to use a pond fan/pump).

It’s unsightly and such, but maybe w/ a white fan it would be better. Also, it holds it’s shape well and is easy to move around so you could move it for special occasions or seasons.

The way this bed cooling system sets up the fan is at the foot of the bed so a timer or remote is handy. I went w/ a timer so I could turn it on and later, once I’ve cooled off, it will turn off on it’s own.

Shape the hose to go from the fan (on the floor) up and under the covers. Bend the end to face towards the head of the bed.

You can’t really see the end of the hose, but it’s aiming towards the top of the bed. The hose really holds it shape so this won’t be an issue.

Put the fan at the base of the hose. I used hot glue to hold it together and it has worked well. I taped it at first to make sure I had it working right.

That’s really it. If you have a timer or remote, plug those in. You may be able to run the power cord under your bed and make it look a bit nicer???

You might be able to get a smaller hose but it would really affect the performance – particularly how much air from the fan gets through it. Or a longer hose and run it along the bed, but that too could make the air flow subpar.

As I mentioned, I tried a couple other things first and they didn’t work: tubes too small, too long, etc.

A more flexible tube might let you move it out of sight during the day, but I’d wonder if at night it would get pushed around to face the wrong way or get crimped.

A couple of pics… 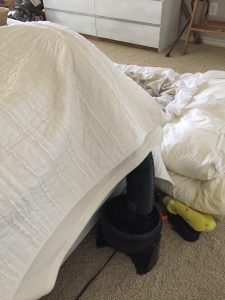 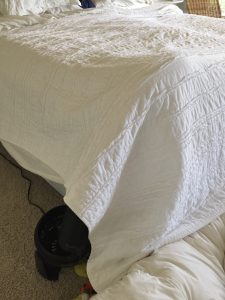