Three recent things that are powerful and, in a sense, have a lot in common…

Icarus, on Netflix, was suggested to me by a friend recently and I watched it last week. It’s about the international issues with PED (performance enhancing drugs) and doping in sports. It focus on the Olympics and those “in control” of the drug testing. 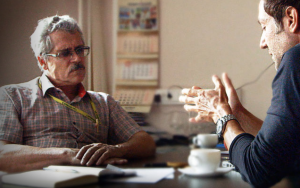 It made me think of the SNL “All Drug Olympics” skit. Truth is stranger than fiction.

Let’s just let them do it. Nothing is really stopping them and it’s just wasting a lot of time and money. Who are we kidding?

And if you think it’s a health issue, watch “Bigger, Stronger, Faster.” I’m not saying they’re one or the other but it’s a fascinating look at it.

In Icarus, the director decided to use himself as a guinea pig and see if he can improve his already-great cycling performance. He winds up getting into a program of drugs guided by the head of the Russian drug testing lab. Who better to help you cheat that the one running the tests! 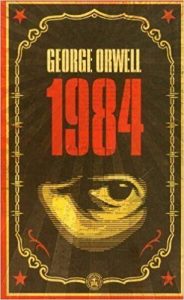 It’s an amazing story and series of events and shocking how open his guide is to tell the story.

He explains how they cheated and continue to do so. It’s a complex process and he’s very matter of fact. He’s also currently in the witness protection program. So… there’s that.

The Russian lab director claims his life blueprint is from the novel “1984” by George Orwell. The main tenants of the government in the book are:

He read it he was a young adult and it formed his view of the world. Scary. If I had done that, my blueprint would be “Confederacy of Dunces.” To be honest… it would probably be like the first third of it. I got bored with the whole… words. Come to think of it, maybe that is my blueprint. Yikes. 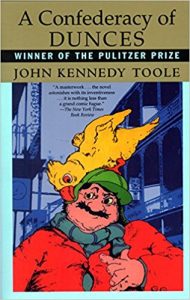 With those 3 tenants as your guide, you are fairly capable of doing just about anything while also denying it and working against the same ideas. Confused. Good, it means you might be sane.

One thing that struck me in “1984” is that while the government is in control to deceive everyone, the very people they are working to deceive they also employ to do the deceiving. If everyone is a part of the charade, why can’t they just… stop? Fear and pain.

My wife read “Bad Blood” last week and recommended it. I read it this weekend and it also seemed to be in the same vein or thought of these.

It’s about Elizabeth Holmes and her overnight rise to billion dollar wealth and Silicon Valley startup value… and subsequent fall (which is still going on).

It’s utter nonsense… and people are paying by the truckload to buy it up. She had an idea at 19 which is the kind of idea you’d expect from a 19-year-old these days. “Why draw a lot of blood to do blood tests? Why not just draw a little? Yeah, I’ll make a company that does that and it will be great.” Never mind the science!

It makes me want to say “Why build an engine that’s big a loud? We’ll build one that’s small, quiet, runs on good thoughts and emits diamonds! Ready to invest?” Who wouldn’t invest in that? (A: Anyone with a sense of reality.) 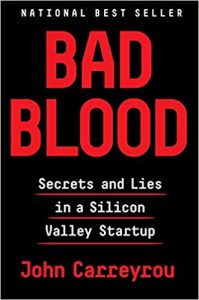 be in unless it’s real?” She just needed to get the first person and the rest followed. Those asking for proof or pointing out problems were invited to leave.

Only Tom Sawyer getting the fence painted is a better trickster. But he was thinking small.

Any reasonable person would know they’d eventually get caught. Of course, she wasn’t reasonable. And she didn’t have the knowledge to know what she was hoping to do wasn’t going to be done by her/the company. It was literally too good to be true. Yet they lined up.

Being a parent now I have to ask: And where are her parents? Why aren’t they explaining that lying is a no-no? “You stole hundreds of millions and put people’s lives in danger. Go to your room, young lady!”

She unfortunately seemed to believe too many of the sayings like “If you can believe it, you can achieve it!” Sorry, kids. It ain’t so. I’ll be the bad guy and give you the news.

I think another reason people might have believed her is that – who would lie to this extent!?!? I mean, who does this? I would have a breakdown the first day… make that hour… ok, second.

I wouldn’t say “I’m going to build a car for you by this afternoon.” I know I’ll get caught because I’m not going to be able to do it. Of course, if I keep delaying I might get another sale since I got the one (you’re playing a giant fool in this scenario but just go with it). Similar to a Ponzi scheme but without the smarts. I eventually have to produce a car.

The other thing is – you know what a car is. If I show up with a water bottle… but maybe if I fake a low voice you’ll be cool about it. Yeah, Elizabeth has this fake lowered voice. People believe low voices… James Earl Jones can’t lie. Morgan Freeman is a fountain of truth.

But she was delusional. She seemed to truly believe that a) she was put on earth to do this… I’d call it “to receive this” because she was never going to develop anything with her 1.5 years of college and 0 background in this stuff, b) she felt if you pushed hard enough anything can be done (believe the “Steve Jobs” approach but without the actual reality) and c) they literally could sell the product and then make it… but they couldn’t make it. Details.

Along those lines she ironically helped her competition. She proved they’re the best possible (at this time). She’ll probably go to jail having spent hundreds of millions proving their status. Like Haman working so hard to kill Mordecai only for it all to turn against himself.

Again, the employees (or a very, very, very higher percentage of them) knew what was going on. Many of them were fired or quit (or worse) because of it. But they were scared, intimidated, afraid and (thought they were) alone. She silo’ed the groups so communication was difficult. Divide and conquer.

She also had tons of money to throw at them.

All of this reminds me of the situation at a job I had. The new owners brought in a guy who had a track record and talk appearing to be able to do the job and run the company. It was all smoke and mirrors. He’d tell one person one thing and another person something completely different.

I have to think it was intentional (as in he intended the people to talk, realize there was something up and maybe quit??? Save money without firing???). It was also a case of separating people with plans. Instead of telling the group it’s moving out of state, go to individuals.

Make offers and allow people to connect their own dots. “I better take this offer and move to keep my job or I’ll be let go.” or “I’m special so they’re going to keep me.” Also, “don’t tell the others.” Eventually if enough individuals go, there’s not enough people left to openly discuss and do anything about it.

On a Friday I called them on it and said “I know you’re moving the whole team or letting us go. I just want to know when.” They agreed to meet and give us info on Monday. We were laid-off on Monday (some given the option to move out of state).

This person literally said “perception is reality” one time. If someone looks you in the eye and says that without laughing, run. Seriously. At least trot with a bit of urgency.

That company (like Elizabeth Holmes’ company, Theranos) is now gone. Once work millions and now gone.

The take away: People are crazy. People spin crazy webs. Other people are sucked into the “reality distortion field” and want a part of it. Many stories that are huge successes sound “too good to be true” and we deceive ourselves… and even refuse to believe people we trust.

It’s a scary commentary on where culture and society is today.

Are we all doing the same thing? We KNOW the pro athletes are using the drugs! They sometimes even get caught. So do you think they only catch the ones doing it? HA! Don’t be so naive.

Do we think only the dishonest companies get caught? How long did VW cheat emissions tests before getting caught? Are they the only ones?

How many news stories do we read about a company getting caught and paying fines… like “Ok, all better. Pretend we didn’t do it.” If they weren’t caught, they’d still be doing it. They know they’re doing it. We all agree on that, right?

Don’t even get me started on politicians. It doesn’t really matter what they do – they’ll never pay the price. I mean… if a politician on a committee punishes another politician… I mean… the curtain really would be pulled back. “If I rat on them, they’ll rat on me… Dismissed!”

But there are ethics committees. That seems a lot like the addicts guarding the drugs.

And we just watch the circus and buy more concessions.