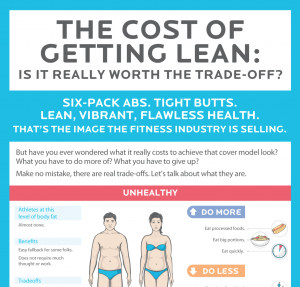 When I decided to get in shape, that was one thing. Then I wanted to get in really great shape, was it worth it?

I saw this infographic today and knew this was the same thing I was talking about. They didn’t state it as “maintaining six-pack abs”, but you know what they’re saying.

I wanted to go somewhat extreme and see what it takes to get in really great shape: low body-fat, muscles defined, six-pack abs. What would it take as far as diet, exercise, time and over all discipline and cost.

It was clear pretty early that the answer was no. The time and diet were the main factors. The cost was the next – the amount and types of food I had to get were expensive. Also, it was a lot of effort both in time and energy but also mental and emotional discipline. 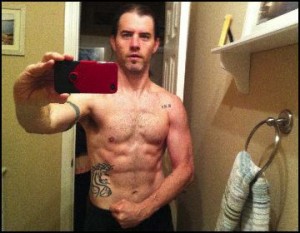 But I wanted to know that from experience. I’ve done other experiments before: going vegetarian, sleeping 5 hours per night for years, etc. They all have pros and cons.

Maintaining six-pack abs was not worth the cost. I like burgers. I like beer and wine. I try not to indulge in anything “too” much, but to maintain what I had pretty much meant those things would be schedule annually.

Of course, I could workout MORE and maybe have those things, but again, it’s all part of the cost.

I liked. A lot. But it wasn’t something that I was going to maintain longterm with really any other interests in my life. I’m not saying “I couldn’t” – I decide it wasn’t worth it.

I picked the things that are worth it in all the areas of diet and exercise and maintain a great level of overall health in the most beneficial ways. Diet is 80% of everything and I use my own shake recipe for help maintaining six-pack abs.

My six-pack abs aren’t what they were, but for the amount of effort, I prefer what I’m doing now.