It was the day before Halloween and all through the house were flies! We’ve had the door open a lot lately with the nice weather and flies have been giving us some good combat training.

Actually, they haven’t been super annoying as I’d expect, but it seems like right after we kill one, another one is buzzing around. I started a graveyard as a warning… 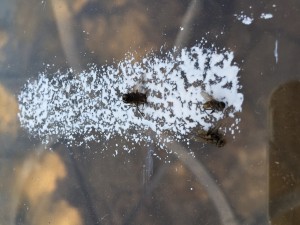 I went to prayer with some guys from church and handed in my membership form. I’m now an official member of Benchmark Bible Church! We’ve had a great first year and we’re excited about things continuing and coming changes!

After that, I worked from home which was a nice change from the previous couple of days having to go to meetings.

I have a couple of good prospective clients and am excited about some upcoming projects.

It’s a bunch of lettuce with carrots, cheese and turkey. I don’t like normal dressings much so I used mango berry chipotle jelly and then some candied jalapeños on top. Very good stuff actually.

I like salad and soup but I don’t think I do so I never seek it out. I need to convince myself that I do like them.

The Saints played last night but it was the first Thursday Night Football not on CBS. I’m still confused. It was on the NFL Network – that’s a thing? Actually, I think we had that in Steamboat Springs.

I looked into it and went to nfl.com and it was on! There were all types of ways to sign up, but it was just free on the site. If they think I’ll pay just so I can sit on my couch and watch they don’t know me very well. 🙂 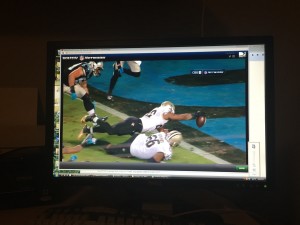 SPOILER: The Saints won! It was a fun game to watch. Honestly, I would have preferred watching on the couch, but I’m not sure how much I’d pay for that. The problem is the whole subscription model.

I’d probably be willing to pay $3 or something for a game, but not $25 for the season. I know I’d probably miss half the games. Who knows. Who dat!

Also, I was able to pause the game with a few minutes to go… yes, I could sleep without seeing the end given it was 28 to 10 at the time. I see that as a sign of maturity. In the past, I’d have to see the last second tick off before resting.

I finished watching this morning so the experiment paid off – the pause works even over several hours.

Isn’t it weird sometimes how you can go to sleep and then wake up several hours later and it’s like “Man, I was just here.” That’s how I feel right now – like, wasn’t it just last night a few minutes ago?

On a sad note, it’s time to get rid of Blackie Beanbag chair. I’ve had him for about 20 years and he’s been a wonderful beanbag chair. He’s about the only thing I have from before I moved to Sweden. Him and a table in the garage (I don’t like that table). 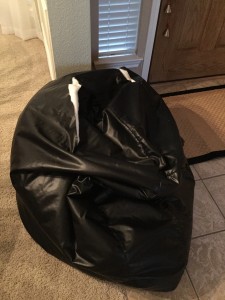 Just in the last few months some tears have formed and it’s just time. It’s one of those cases where you don’t use something b/c it might make it worse and so why do you keep it? To NOT use it?

I never really named him Blackie. That was just for awesome storytelling. I should have named him. I guess I’ll have to name…

His replacement! Yep, I ordered a new beanbag chair that’s even bigger!