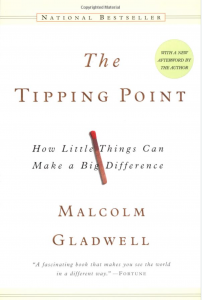 After “David and Goliath” I wanted to read more Malcolm Gladwell books and quickly read “The Tipping Point.”

The Tipping Point is a great book also about the point/factor that takes a given item (disease, idea, slogan, etc.) from just that to an epidemic. What makes something go viral?

I’ve had my own theories and some are try – especially the obvious one of “find someone famous to tweet about it.” I once suggested to a friend to name his blog “bradpittistryingtokillme.com” – when he wondered about being sued by Mr. Pitt, I suggested that would be the best thing that could happen.

Gladwell explains that while an epidemic takes a lot of people, when you drill down to the source, it’s usually due to just a few key people. Those people are key to making the concept, idea, fashion, trend, etc. go from something small to something huge. And there’s a reason why those people make it happen.

Connectors – these are people that know tons of people. When you ask them who to talk to about a given subject, they’ll have suggestions.

Mavens – these are people who know a lot about subjects. When you ask them about what computer to buy, they have an opinion, suggestion and they are respected for it.

Salesmen – these are people who can convince people to act on something. When they share with you about a cause, you want to get involved.

A big example in the book was about Paul Revere’s ride. Few people know that William Dawes also made a similar ride that night. But Dawes wasn’t like Revere. Revere had the background, knowledge and personality that made him good as a connector, maven and salesmen.

He knew who to contact, he knew about what was going on and he could convince people to act.

Dawes’ ride wasn’t as successful. In fact, one town he visited on his ride was accused of being sympathetic to the British b/c no one showed up to fight.

Nothing’s going to catch on if it’s not remarkable, if no one takes notice, if it doesn’t stand out.

It’s the quality that compels people to take note and remain engaged.

Gladwell goes into detail about how Sesame Street evolved through very much research and study about how to get children to engage. In some ways it’s through simplicity and clarity. Children tend to disconnect when something is confusing. But they quickly reengage when it’s clear again. So while children may play during the show, they’ll engage at key times.

One key person at Sesame Street left and started Blues Clues. He built upon concepts from Sesame Street but made the show one idea thread though the whole show. Also, he built upon the observation that keys often participate in the show. Repeated viewings also showed that engagement increased each time so it’s shown repeatedly (the same show each day for a week as opposed to different episodes).

“There is a simple way to package information that, under the right circumstances, can make it irresistible. All you have to do is find it!”

The situation and environment can affect behavior. It sounds obvious but it’s also key.

If you allow a city area to have graffiti and broken windows w/o repair, people take note that no one cares and they no longer care. The reverse is true to. It’s the Broken Windows theory.

Another interesting aspect of context is the size of a group. Many organizations, companies, militias and churches have realized that 150 is about the largest size group when people can still have personal contact with others.

With that size group, there’s a built in reliance and pressure (inherent) to do well for the good of the group. Larger than that and people can’t maintain and they form sub-groups and feel anonymous enough to let the group down.

Gladwell also points out in The Tipping Point that we so often treat the symptom or treat the problem w/ logic that doesn’t address the issue. He uses smoking as the example.

People that smoke tend to smoke b/c when they were a kid someone “cool” in their life smoked. They associate the two and boom. However, many quit, some just smoke occasionally and the rest become addicted.

But we treat the issue by educating teens about the harms of smoking. They don’t care. People still smoke knowing that. Teens will experiment with anything despite being horrible, even deadly, for them.

So we need to make smoking less addictive (e.g., lower the nicotine so that it’s harder to get the high and become addicted).

Also, people that smoke have other character traits like being risk takers, spontaneous and other things that make them “cool” to teens. So they seem cool and smoke and the teens associate the two.

So if we can remove the addictive part, we can have “cool” people still be attractive but remove the contagiousness of smoking.

Not easy to do by any means, but the theory could be translated to other areas where we currently treat the symptom or treat it wrongly.

But the idea of something crossing the Tipping Point and becoming viral takes a few things. You need people to represent it, defend it, communicate it and sell it – and these need to be the right people (connectors, mavens and salesmen). It has to be something sticky – it has to keep them engaged. And it has to be in the right context (you can’t sell a luxury car to starving people).

He also brings up the concept of immunity. A great example is email – when you first got email (same for social media, TV, phones, etc.) you were probably very engaged. Only your good friends sent you anything, it was interesting, etc.

Now you probably get mostly junk/spam and are a bit tone deaf to it all.

We become immune in many areas to something going viral. Our system has control the outbreak. No one sends chain letters anymore. 🙂