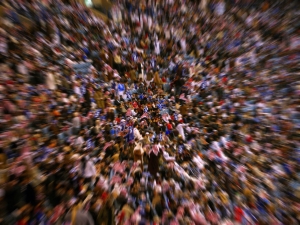 We all have perceptions of other groups of people: conservatives, liberals, Christians, rich, poor, famous, athletes, etc. And those perceptions are based on our experiences and input. It’s valid in that sense.

But typically those perceptions are based on a subset of the group – a subset that gets the attention. Think of a group of people and then think of what the media shows about them. Televangelists and politicians involved in scandal. Protesters protesting by chaining themselves to something.

My point is, it’s the extremists that get the attention. And that’s often how we form our opinion – based on them.

However, if you take an average person in that group, they’re less likely to be as extreme. I’m not saying that makes them the best example of a group, but they’re one you’re not going to hear about: the NASCAR fan that quietly enjoys the race, the frugal millionaire who doesn’t throw wild parties, the celebrity who doesn’t get whacked out on drugs.

When was the last time you saw Robert DiNero or Spielberg or Pacino in the news about something controversial? They aren’t going nuts so there’s no news.

Given the above logic, I somewhat have to say that unless I base my opinion on a group by personal relationships, my perception is skewed and to the same degree wrong.

Of course, there are cases where my opinion is based on personal relationships and it’s the same. 🙂 That’s confirmation, I suppose, of my perception.

2 Responses to "Throw Out Your Perceptions of Other Groups"