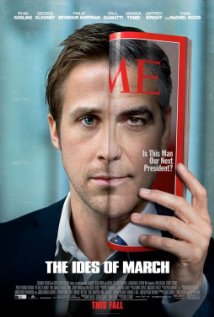 Even the purest of hearts can be corrupted in politics.

If you haven’t seen it…

Good dialogue and story-line about the political game in front of and behind the scenes.

If you want to know a bit more…

I thought it was a bit heavy handed, naive and bias (liberal propaganda) at first, but people start to show their true colors once in the system.

Ryan Gosling is good, but it might not be the best venue for him. I like him better in other roles like Drive, “Lars and the Real Girl” and “Crazy, Stupid, Love.”

If you’ve seen it…

It’s a bit far fetched, but I think it’s ok since they’re trying to hit a variety of points in order to complete the message.

It’s a great contrast (similarity) btwn him explaining to Molly why she has to leave and himself getting a similar speech right after.

They choose different ways out of their problem. Both are bad.

They do some things right and nothing, to me, was terrible but ultimately it falls a bit flat. Maybe they aimed too high and should have focused on something a bit more attainable in an hour and 30+ minutes.