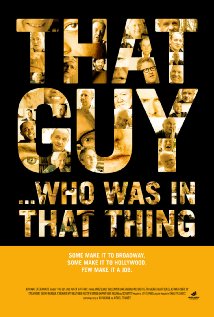 This was interesting. It was cool to get the perspective of actors who are successful for the most part, but aren’t huge.

I can completely see how they’d stress and worry and the various things they’d do for acting.

However, at the same time, I couldn’t help but think of them as a bit… spoiled? That might not be the right word.

But they talked about how you might not work for a while so you have to have patience or a hobby or something. How about a job?

Also, they talk about you might only make $3k for a weeks work… I think a lot of people would kill for that. I know it’s not a ton and they aren’t getting that every week, but that’s only a bad thing in their reality…

If I’m only going to work 1 week a month, $3k isn’t enough. Yep, you’re right. But the solution isn’t necessarily to get paid more, it’s to work more. If that’s not an option, then maybe you need to get a job???

Anyway, it was interesting and I like the guys in it, but sometimes I think people feel like whatever they do deserves to be a good living and if it’s not, something’s wrong and they sd do something else.