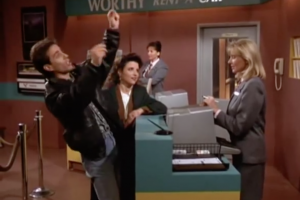 It reminds me of the Seinfeld scene where he explains “Anyone can take a reservation.” but it’s the holding a reservation that matters.

28 “Suppose one of you wants to build a tower. Won’t you first sit down and estimate the cost to see if you have enough money to complete it? 29 For if you lay the foundation and are not able to finish it, everyone who sees it will ridicule you, 30 saying, ‘This person began to build and wasn’t able to finish.’

What good is it if you start something but never had a chance of finishing because you weren’t prepared?

And what makes it real – what makes it scary – is the context in which Jesus is speaking above. He’s talking about being His disciple…

The idea is, you need to know what it costs and be ready and willing to follow through. Notice it doesn’t say “you won’t be a good disciple” – you cannot be one.

It would be better not to start something then to drop the ball and give up. Certainly there are times when the situation changes or similar and you have to stop. But you know the difference between that and just dropping the ball.

It’s very impressive to other when you say you’re going to do something. God isn’t impressed. He’s more impressed w/ the widow privately giving the 2 pennies than the big-talker.

Live to please Him… and know that it’s really only in Him that you can do anything anyway.