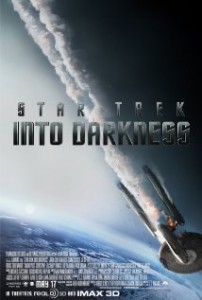 If you haven’t seen it…

If you want to know more…

There’s a lot of typical “Kirk is a rogue captain” and good bit of Star Trek history type stuff and call-backs.

If you’ve seen it…

I thought it was more action and less story (JJ Abrams). And while I’m not a super, super, super Trekkie, I have been watching it since I was like 10, had the blue prints to the Enterprise, the RPG game, etc. So while I don’t live it, I certainly love it. And I cdn’t turn off the ‘continuity’ sensors – so he’s met Kahn before? The whole crew sees Spock on screen and Spock tells them about their encounter w/ Kahn? Pike’s dead?

There’s also a few places where they foreshadowing is a bit heavy (and I’m usually good and passing that up). The tribble… “I wonder if this will come back up that he’s injecting the blood into the dead tribble.”

Also, the non-answered question/plot, “So listen carefully to what I’m about to tell you…”

I was mixed on Spock yelling “KAHN!” It would have been great if it wasn’t such a funny meme-like thing for people to do.

So I was able to enjoy it for what it was: 21st century JJ Abrams action movie set in space w/ characters we love.