I have mixed thoughts on RockSmith so far. I think partially b/c when I see a fault in it I allow myself to go w/ that thinking “I bet RockSmith 2014 is going to be better about that.”

Another similar issue is that I don’t know/care for a lot of the songs. They sell downloadable songs, but I’m not going to get any w/ the new version coming out (will they transfer?).

I tried going thru the ‘Journey’ for most of the time and that’s been good, but eventually I just didn’t enjoy the songs enough to stick w/ it. 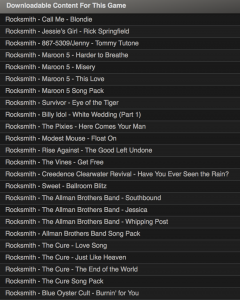 Switching over to the ‘Songs’ section and just playing those is cool, but there’s only a handful that I already know and am interested in. Plus, the interface for some things isn’t that great and I keep just wanting the new one instead of putting up w/ it.

So it’s good, but I doubt I’ll spend too much more time w/ it before the new one comes out in a few weeks. At thing point, I mostly just want to get more and more comfortable w/ reading the strings/frets w/ their interface so I can jump in faster on the new one.