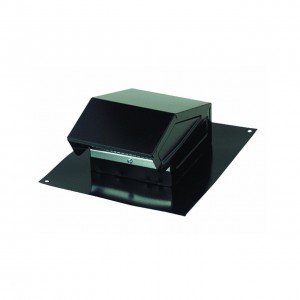 Our dryer wasn’t drying and there was no lint in the lint filter screen. What’s up? Turns out, yet again my dryer vent was clogged (birds nest). I had to replace the dryer vent on roof kit (vent cap only).

At the bottom of this post I explain why I recommend this to replace your dryer vent on roof.

I cleaned out the duct connecting the dryer to the wall and got out a small cat made of lint. Then I hooked up the blower to the wall vent. 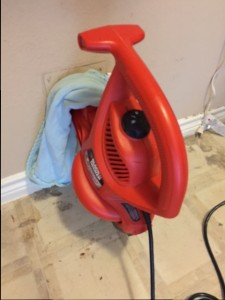 It blew out a bunch of lint around the roof and yard.

But when I got on the roof, I could get my hand under the vent and feel there was twigs and such. I knew nothing short of pulling it off would get that bad boy out. 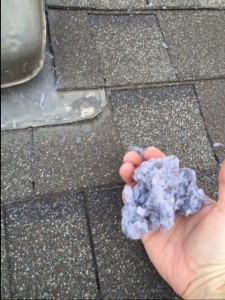 Just a couple nails hold wedged in the shingles. It was pretty easy to remove. Once removed, a second cat (made of twigs) was removed. 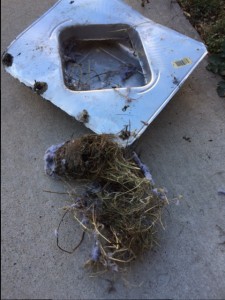 I bought a 10-foot brush to clean it out. The brush bristles are firm so it worked well. However, the flexible handle is pretty loose so I could only get it back about 3-4 feet. A duct straight down would work awesome.

I taped it to a PVC pipe so I could shove it back a bit farther. Unfortunately, the duct has a couple of turns so I could only get about 5 feet back. 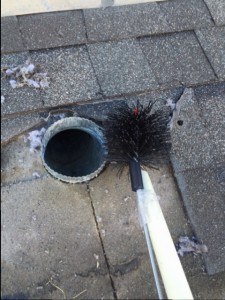 I let the dryer run while I moved the brush around to blow loosened lint right in my face.

The new vent goes in where the old one was. The new one was smaller than my old one, but I had some shingles in the garage that I used to fill in. I also used silicon caulk to seal any potential water leaks.

When you do this project, you’ll see that the important/hard part is cleaning out the duct. Removing the old vent is easy. And installing the new one (or even returning the old one) is very straight forward and obvious. If you’re even considering this project, you probably have enough skill and intelligence to do that part without problem.

This roof dryer vent is good for a few reasons. For one thing, the price is good. Also, with the kit you get several pieces you might need for the job. I didn’t need these, but I didn’t know that before starting so I played it save. 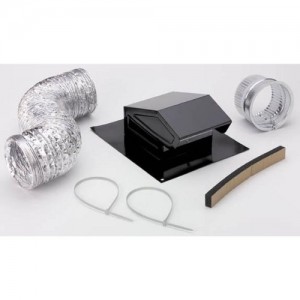 The vent has 1 exit and it’s visible. My old one had air flowing on all sides and I couldn’t see under it. I never knew if it was clogged. From the ground, I can look at this vent and see if anything is blocking the air.

Also, this vent has a screen on the front to prevent birds from getting in. Unfortunately this can also catch lint when it’s wet, but at least I can see it at a glance and get up there to remove it. The screen pops in and out so it takes about 30 seconds to clean.

Beyond that it also has a swinging door so even if the screen falls off, it’s not just an open hole for a bird to climb in. However, I’ve seen birds open these doors so… I’m counting on the screen mostly.