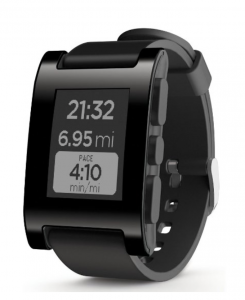 I just got a Pebble Smartwatch the other day. I wanted to post some quick ‘first thoughts’ and concept ideas/review…

My first thoughts are that it’s really cool and fun – it’s always fun to get a new toy.

It’s fairly intuitive to figure things out. It connected easily to my iPhone and has only a few buttons so playing around with it is pretty clear.

The main feature is getting notifications on the watch. Texts, reminders, calls, etc. display on the watch. You can’t do much w/ them but it’s information and may allow you to avoid getting your phone out (imagine getting a reminder while running).

W/ the Pebble iOS app you can install new faces and apps. Some apps are really more like plugins for the Pebble app. Others (like Pandora) have a companion app. And others only work directly w/ an app. The ‘plugins’ don’t cost, but they can require separate apps (via the AppStore) which can cost.

For example, if you get the Pandora (full) app, you can play/pause and skip to the next song by using your Pebble as a remote. However, if you also get the plugin/app for the Pebble app, you can thumbs up/down a song. This seems to replace the skip song feature though so I removed the plugin app. 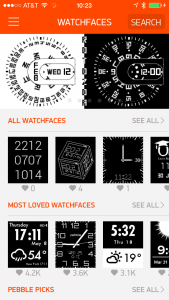 There’s some built in fitness and similar features so the watch working as a pedometer is pretty common in apps.

The built in accelerometer allows for a lot of similar functions for games and fitness.

I have the YWeather watch face which to include the weather w/ the time and date. There’s other apps that give more weather data like Pebble Cards.

So far the battery charge seems to last a long time, but I haven’t used it exclusively as a watch nor have I left bluetooth on 24 hours a day. I have a feeling their week estimation on the battery life seems fairly reasonable.