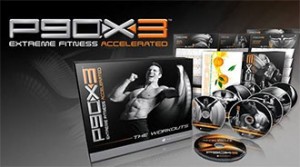 I started P90X3 yesterday (officially). I spent some time in the week or so before planning it out w/ meal plans and such.

The book does a good job of breaking down easily what your caloric goals should be and how to break that up into meals/snacks.

It’s very general which helps you grasp it better and not have to do so much measuring. It’s still work, but you’re not counting calories and such so much.

I did the first workout yesterday: Total Synergistics.

It was a very good workout though I had to watch a good bit to get the moves down. Once I have them in my head better, I’ll be able to focus on the move more than the video.

But they’re new takes on existing moves so while it was somewhat new it was also somewhat familiar.

Either way, it was fairly hard since they weren’t moves I normally do. Also, in most cases you can push as hard as you like by varying speed, weight, etc. so there’s no excuse for not getting a good workout.

Today I did Agility X! Will post on that later.