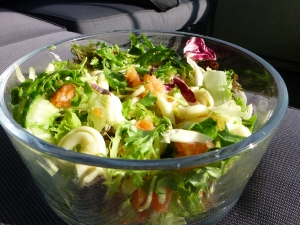 I go to a salad bar often where you pay by weight. So what do you get? A TON of spinach because it’s light? Those marinated mushrooms are heavy! The chicken salad is heavy too!

You can get lot more of the light stuff.

However, you’re paying (in this case) $7 per pound for spinach. That doesn’t seem like a good deal.

No, I’d rather pay for the items that take time, energy, effort, talent/skill, knowledge and more to prepare. The complex items are what I want. They might be heavier, but I’m paying for the work mostly.

It’s the same for a restaurant – food can be inexpensive at times. But to know how to make something, shop for ingredients, chop, cut, boil, marinade, prep, cook, serve, clean… that’s largely what I’ll pay for.

I thought about making my own pull-up bar too. The materials would be cheap… but how would I bend it to the right shape? Can my drill put holes in that bar? What about the grips?

If you were going to pay someone to make you a pull-up bar, how much would it cost? Just the time would probably be a lot more than a store-bought pull-up bar – forget the materials. Again, it’s the effort, skill, talent, time, knowledge.