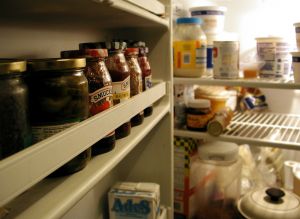 My wife put a coffee mug for me by the coffeemaker which is typically where she puts it every morning. Don’t I have a great wife – making coffee, gets me a mug – she’s a gem. 🙂

Well, I walked up after being up for about 15-20 minutes – so I wasn’t too groggy – and was going to get a cup of coffee. Here enters the refrigerator blindness…

It was about 12 inches closer to me than it had been. I was the one that moved it. And I blame refrigerator blindness. I couldn’t see something right in front of me. Why?

I believe it was because it wasn’t where I expected it to be and my mind kept me from seeing anything else.

I literally looked around the kitchen. I said “I just saw the mug. Where is it?” I knew which mug I was expecting to see, but it wasn’t where I expected it to be.

It would be as if you were looking for the milk in the refrigerator and because of refrigerator blindness (it being in a different spot or somehow not being as you’d expect) that your brain suddenly shifted to looking for a raccoon – which hopefully isn’t in your fridge.

It’s almost like once you don’t see it, now you’re just looking to prove it’s not there. Does that makes sense? If so, please explain it to me. 🙂

I can’t explain it even if it’s somewhat correct. But that’s at least how I can think of it to try to counteract it.

So next time I’m hit with refrigerator blindness, I need to think of the thing I’m looking for, what other forms it might be taking (gallon of milk but it could be a cardboard carton) and focus on seeing it. I should focus on finding the thing (milk) as opposed to what I’m expecting in my mind’s eye (“half-full gallon of milk with a blue cap”).