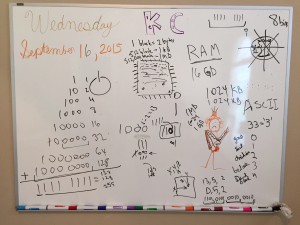 I’m continuing with the homeschool tech lessons based on number systems (binary, decimal and hexadecimal). In the last lesson I moved on to explain how it relates to computers…

I reminded the boys about an on/off button on things – it has a 0 and 1 which stand for off and on respectively. That’s binary – an on/off switch.

Computer memory is full of tons of little switches that can be on or off and, like binary, can be added up to mean larger numbers. Those numbers represent data for files, images, video, music and everything else stored in a computer.

I mentioned ASCII which is how letters and numbers are often stored (e.g., 33 in hexadecimal = the character 3). So when you type a 3 on your keyboard, a 33 hexadecimal is stored to represent that. All letters, numbers, punctuation, etc. have values in ASCII so a text file is stored as those number values.

I explained how old Spanish doubloons were cut into 8 pieces to make a dollar (e.g., pieces of 8 in Pirate-speak). Since 2 pieces were worth a quarter, the chant goes “shave and a haircut, 2 bits!” 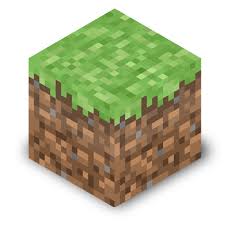 Then we talked about how each block has a location in the world including how high it’s located. Those are X, Y and Z values. So for an obsidian block stored at 13, 5, 2 we could get the values:

Of course a world holds data for your character, mobs, time of day, chests, chests’ contents, time, etc. but you get the idea.