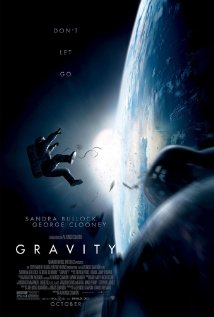 Space is basically the vehicle for this intense story of isolation, desperation and letting go.

Gravity is the force that holds things together by mutual force. W/o it, we have no barring or direction. If we spend too much time w/o it, we may lose the sense of it and not be able to handle it well again.

Bullock’s character, Ryan Stone, lost her young daughter. Since then, she’s had no gravity. Out in space, tragedy strikes and she struggles w/ letting go of the very things that will kill her and drag her away.

She finds her strength time and again to do the impossible, let go and seek a new gravity.

She faces her fears, decides to go on and at the same time accept her losses gracefully.

In the end, she feels the real pull of gravity, but being w/o it so long forces her to learn again what it’s like to walk.

Particularly intense to me were the scenes of the fragments colliding into things but w/o sound. Yow!