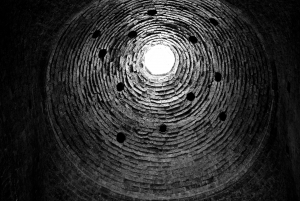 Chapter 36 shows the descendants of Esau which is a lot of chiefs and kings – worldly success.

Chapter 37, in contrast, shows Jacob’s line focusing on Joseph (who is not in the King’s line which we’ll see tmrw).

Joseph is a strong ‘type’ of Christ so we see many similarities w/ him and Jesus:

Then in chapter 38 we move to the next contrast: Judah. He takes off, marries a Canaanite, has a few kids and marries off the first son, Er (what a name), to Tamar. Er “was evil in the sight of the Lord” and God takes his life. Yikes! What did he do?

Judah has his second son Onan do his duty and marry the widow. He displeases God and dies too.

Judah’s a bit scared at this point and tells (lies) Tamar to wait until his next son is grown.

Meanwhile, Judah’s wife dies and he goes into town and beds down a harlot… so he thought. Behold, it’s Tamar (he doesn’t know yet)! It’s all Telenovela up in here!