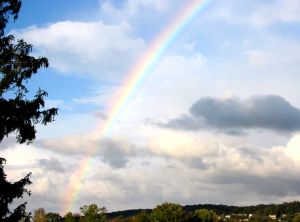 So God creates, gives and sets the one rule… that we break. Then all goes south pretty quick. But He provides a way out for the righteous and even shuts the door – it’s all Him.

But it takes a while and may be lonely, scary and stinky in the process. He could do it w/ a word, but there’s a process – typically to teach/show us something or prepare us.

Maybe it took a while so that Noah and his family could forget the past ways and habits. Maybe it was so that they had time to mourn the loss or learn that God would get them thru even the hardest times. Or maybe it was just so the earth had time to get clean (dead flesh takes time to rot).

God gives the same command to be fruitful and multiply and Noah starts well by building an altar and offering burnt offerings to God.

God gives the rainbow as a sign to us and a reminder to Him that He’ll never destroy the earth’s flesh by flood again. This was the first time it ever rained on earth. If He hadn’t done this, what do you think they would have thought the second time it rained? “Here we go again!”

In V9:20, work begins again and Noah also plants a vineyard (celebration, pleasure) … and… he gets drunk. He must have known Ham well enough to know it was he that took pleasure in it and cursed him. Then Noah dies. Not the greatest ending to his life.

Chapter 10 is a overview of the descendants which includes a lot of names of nations that we’ll see later… warring with God’s people. Doesn’t look like the second time around is going that much better.