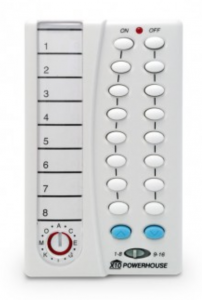 When we bought our first house, I wanted to install a lot of home automation (wikipedia) light switches and such. I was young, didn’t have kids and had lots of motivation. It was fun and made me feel smart and nerdy in a good way.

You could control the lights and small appliances with remote controls. This was in 1998 so it felt like “the future is now!”

I got creative with some timers and macros (hitting one button to do many things). I had one macro that was ‘going to bed.’ You hit one button and it would turn off most lights in the house and turn on our bedside lamps.

I decided to write my own interface on the computer to really let myself control more things and perform more operations and timers and macros and more! I wrote it in Java which I’d learned not long before then and created the ultimate home automation interface!

Actually, it was fairly unattractive – tons of buttons and input fields. But it let you do just about anything. It worked well and felt like a big accomplishment.

I try now to consider these things when starting something new

I ran it on a separate (older) computer. So basically, the remote control signal would send the command to a little device hooked up to the older computer. It would get into my software and make the decisions: turn off this light, fade up that light and play some audio file to announce what was happening. Then that computer would send the decisions out to the house to perform the actions.

I had to get out of bed and go do some debugging… in my underwear.

Also, computers didn’t have as much processing power and I worked from home a good bit. So having a dedicated computer for home automation helped out by doing all of that.

I even had some motion detectors that, when tripped, caused the computer to get the signal and perform various tasks. I put one in 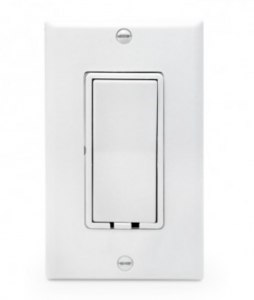 the garage so that when we came home, some lights would turn on. It also played an audio file so I could hear the event that happened.

I used a text-to-speech website to create the audio files. It was actually easier and more clear than recording my own… and it sounded like a computer voice. HAL is telling me what’s going on in my house.

It was nice to be able to get into bed, hit a button, hear the computer announce “Bear – going to bed” and the lights adjust accordingly.

But the problem was that as often as not I’d hit the button… nothing. I wouldn’t hear the audio. The lights wouldn’t adjust.

Of course, I could just get up and adjust the lights by hand. But we’re not animals!

Being the over-do-everything person I am, I had to get out of bed and go do some debugging… in my underwear. There were nights I’d spend hours working on that. The very thing that was suppose to make things easier, simpler and more convenient was making me miserable and tired.

The first thing I had to do was to connect to the old computer from my newer computer. Many times that didn’t work for some reason. So I can’t even start figure out the problem. I’d reboot the old computer… sometimes that would work, but I’d have to set everything back up and test it.

And if rebooting did work, I wouldn’t know what the problem was. Did it just freeze up or was there a real problem with my software? Was it just going to happen again the next night?

So at night, just as I’d be getting into bed to read and relax before sleeping, it’s like I was getting a customer support call… in my underwear.

My wife learned better from this experience than me. She probably cringed every night when I pressed that home automation remote button. When nothing happened, I’d throw the covers back, growl and bit and am off to debug the system of who knows how long.

She was oft heard saying “I just want to turn a light on.” I torture her so.

Since then, when ever I want to over complicate things, she always asks “Am I going to have to log in to a computer to do this?”

It was frustrating to slowly dismantle that system. I spent so much time working on that interface and the connections and everything. Thinking through it and planning it out. Money spent on equipment, switches, remotes and more. What a waste!

When we got our next house, I put home automation switches in, but only switches and remotes. No software. That was fine for a while, but the system I used, goes through your house wiring to send the signals to the switches.

“well, now that it’s working, maybe I can put some more…” Stop!

The remote sends the signal to a device plugged into a socket. It then sends the signal out like (“A1 – turn on”). Whatever switch or switches are set to be A1, should turn on. However, in some homes, the wiring prevents it from reaching across the house.

I’d experiment with where it was best to put the device receiving the signal from the remote. It was not usually an obvious spot like right in the middle of the house. So I’d plug it in somewhere, trying turning on and off various switches or lamps in the house and then try another socket.

One place would work for a while and then not work so good. To remedy this, I put in multiple devices to receive the signal and send it around the house. That seemed to work for a while, but even then it seemed like it was spotty. Like I’d try to dim a lamp and nothing would happen. And then it would dim all the way down. It was quite frustrating.

Not long ago, I went through the house and replaced every home automation light switch with a regular light switch. It was like paying off a loan – very freeing! It was just nagging me for years. It was an especially painful rig in the living room.

So taking all the switches out was very nice. So I also took out all but one of the receivers.

The only things left on home automation are our bedside lamps. That’s mainly because the switches are on the cords which are behind our headboard. Now with just two things on the system and one receiver plugged into a socket. The lamps work great.

Part of me is tempted to think “well, now that it’s working, maybe I can put some more…” Stop! I need to hear my wife’s voice asking if we’ll need to log into a computer to do it.

…replaced every home automation light switch with a regular light switch. It was like paying off a loan – very freeing!

So what did I learn from my home automation failure? I learned that the thoughts or promises of convenience can often take a lot of work and not even pan out. I learned that simplicity is often just fine, takes less time and is cheaper. I learned that complexity adds more points of failure to a system.

Well, I say I learned those things, but really that was a long time ago and I’ve done a lot more of the same since then. Each time it tends to be my excitement that writes a check my sleep has to pay for. I need to consider the consequences and that others may have to suffer for it. I also need to count the costs in a variety of ways: time, money, opportunity, sleep, etc.

I try now to consider these things when starting something new – particularly in anticipating the various implications coming down the path. I think home automation trained me to see various facets of an effort. Is this going to tie up time? Money? What can go wrong? Will it need to be upgraded regularly over time?

Like buying a car – you may want a corvette, but is that a good family car? commuter car? hardware store car? Is it affordable? Does it get good gas mileage? How much will the tires be? Consider the role it will play and go from there.

I don’t think I’m negative about things, but I try to not just be like a kid who wants a dog and then finds out – Oh, you have to walk them… every day? Feed them? Bathe them?

Hopefully it’s a balance. I’m still working on it.