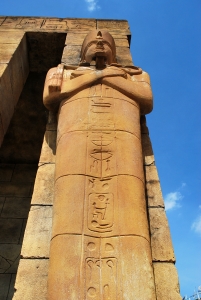 “A new king arose over Egypt who did not know Joseph” – it wasn’t passed down how the Egyptians were blessed b/c of Israel/Joseph. Now a king sees the growing number of Israelites and is scared of them.

Pharaoh is still in power, the Egyptians never took over, and he makes things hard on them. Then he orders their boy babies to be killed and the midwives disobey (and are blessed for it). Then he orders “all his people” to cast newborn sons into the Nile!

He’s going to have everyone kill their babies just so the Hebrews don’t have boys.

As we know, Moses is hidden, found by Pharaoh’s daughter (sympathetic), she pays his mom to raise him and he becomes her son – Pharaoh’s grandson… whom Pharaoh tries to kill (v15) after Moses kills and Egyptian.

So it seems he didn’t have a very secure spot in the family. You’d think Pharaoh’s family could do whatever they wanted, but Moses was scared and rightly so.

He’s 40 at the time and flees to Midian. Gets married, has a son and life seems to have settled into pasturing sheep. Another 40 years later, he sees a burning bush and gets a new assignment… at 80 years old!