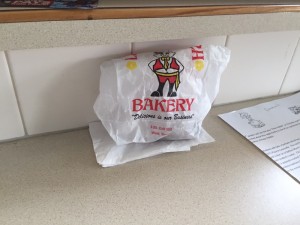 Several weeks ago I brought a cinnamon roll home on a road trip. I was going to save it till the morning. I have a tendency of when I save something, it then becomes special and I’m likely to keep saving it as now… well, it’s special.

My wife tends to declare food as old about 3 or 4 days before I would. That means it’s not uncommon for me to go looking for that ‘special’ thing and… it gone!

If you ever watched “Everybody Loves Raymond” you might remember the episode where they leave the suitcase on the stairs. This was our suitcase.

A friend, we’ll just call him T-bone, had an idea that I swap out the old cinnamon roll for a new one after a while. Then one day I just open the bag and start eating the cinnamon roll way long after it should be old and dry as a stone. I loved the idea.

However, I kept forgetting to get a cinnamon roll… which made it even better when April Fool’s Day rolled around.

I’ll spare you the details of getting the cinnamon roll, but let’s just say I hurried into the house to prep the scene.

I ran in knowing she’d be home about 5-10 minutes after me. I grabbed the bag, took out the old cinnamon stone and sized it up. I cut off about the same size/shape piece from my new delight and wrapped it in new wax paper.

I had to seal up the rest of the new cinnamon roll quick and get it into something air tight b/c my wife has a nose like a bloodhound. I put it all in a plastic bag… behind a box…  in the fridge… in the garage. She can smell fly poop on a rose pedal… at distance.

I put the new cinnamon roll in the original bag and put the bag back where and how it was. I was left to wonder how I’d work it into the events of the night.

It’s pretty common that one or both of has a snack in the evening. I was hoping she’d say something like “I need a sweet treat” which is also common. Fortunately, after several hours, she said it! And so it begins…

I said something like “Hmm, me too, but I don’t have anything. Hey, I know… I’ll eat this here cinnamon roll! Ha ha. Funny.”

I put the bag in the microwave and punched in 9 seconds and said something like “That’ll freshen it up!”

I took it out and she said something like “Disgusting.” She later told me that she wasn’t going to prevent me from eating it. She wouldn’t play that game – even to the extent that when I said I’d heat it up she suggested “Yeah, get a big glass of milk. Enjoy!” But then when I ate it she was shocked.

Before I took a bite she pointed out how gross it was and how this looked rotten and part looked like mold. Fortunately, it made things funny so I didn’t have to play it too serious.

I finally took a bite and she was a bit irritated. She started saying how if I got sick tomorrow she was going to be upset and such. (She, of course, would take care of me, but was just trying to get me to stop.)

She also admitted later how strange it was that 9 seconds in the microwave could make a weeks-old cinnamon roll look so good! And smell so good! YES!

She got pretty mad at this point and later admitted she had to sit down b/c she was getting pretty ticked that I was basically insisting I give myself food poisoning and I was trying to insist she join me.

Let’s barf together – we can hold each other’s hair.

I couldn’t take it anymore and said “April Fool’s!” I think it was a combination of relief, humor and outrage. She took it in good stride and laughed. She said several times how it was a great joke and I really got her good. It’s true. #nailedit

She explained how many millions of thoughts went through her head like how good it looked, smelled, couldn’t believe I would do that, etc.

It’s funny how in situations like that we think things like “Bear usually doesn’t have something sweet this late” and “That’s weird that it isn’t dried up.” but we don’t necessarily catch on.

She enjoyed the rest of the fresh cinnamon roll. 🙂