We were carving pumpkins last night and I wanted to know how to carve a pumpkin with a template. I had my boys come up with ideas and I found templates online.

The younger son wanted Red from Angry Birds and the older wanted a Companion Cube from Portal (video game).

Some sites have you tape the template on, but I wanted the boys to participate in carving pumpkins w/o knives. I cut out the Angry Bird and had him color it on the pumpkin.

For the companion cube, my wife had the idea to use a thumbtack and trace the image outline  with pin holes. Then we connected the dots for the pattern. 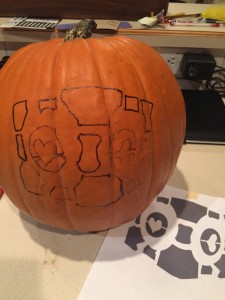 Then we were carving pumpkins! We carved each pattern with a knife. This was pretty tough. The walls of the pumpkin are fairly dense and thick. It’s super hard to carve a curve or do anything really small. 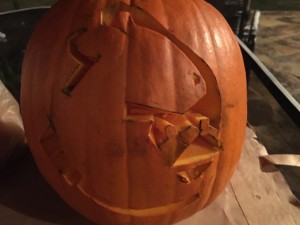 We saw kits at the store w/ “power” tools – basically little power jig saws and such. Ours came out pretty good. 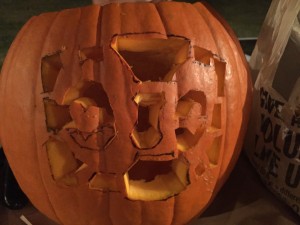 Then we turned out the lights and lit candles in them…

We had a good time doing it. It was a little easier than I expected though we didn’t use anything too crazy. I think they came out pretty good for basically no research, first try and fairly brute-force type tools.

If I were carving pumpkins with templates again, I’d probably either find templates with few lines that are mostly straight or I’d figure out some better tool to use. I was wondering if there’s a drill attachment that could be used.

The next question is how long they will last. I remember a few years ago we carved pumpkins and it seemed like within a couple days they were drooped over.

Have you used templates for carving pumpkins before?