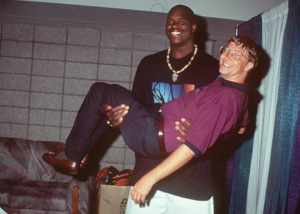 I never was a huge fan of Bill Gates, but some times he does things that make me like him more.

The fact that he let Shaq pick him up and cradle him… that’s pretty awesome. On top of that, he let someone take a pic and he’s smiling about it. Nice.

From his MS days, I just didn’t like the guy’s approach to things, but outside of that, there’s something I dig.