A Gallon of Water Every Day

I think it was good for me, but I just didn’t find out anything new or different.

I used a 24-oz bottle and drank 6 per day. That’s 144 ounces. A gallon is 128 ounces so I had some wiggle room. Also, I only counted the water from the bottle though I usually drink water with most meals.

I used an app to keep track and remind me when to drink. Most of the time I just filled it up and drank the whole thing at once. There may be some benefit to sipping throughout the day???

I knew I wouldn’t do that. Also, when you’re drinking 6 per day, typically you’re never too far away from having had one or having another.

I had one really low day – we had a 14 hour drive and I wasn’t going to put me or my family through that. Towards the end of the month, I had several days where I missed the target officially though it’s possible my other water consumption made up for it. 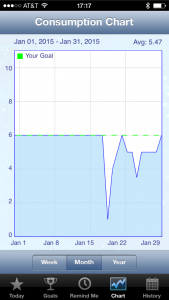 I know that, for me, I get stiff in my joints when I don’t drink enough water. It might take a couple days to notice. Similarly, when I drink water, it goes away. It varies on how long it takes depending on current conditions (e.g., drier in the winter).

Starting on the third day, I noticed I wasn’t stiff the whole month. So that was a good outcome and proof (enough for me).

Also, I get headaches (really I get migraines) when dehydrated. It’s rare, but certainly didn’t happen this month.

For me, I tend to drink enough water. Not always, but I’m convinced of the benefits so I try. Also, I drink very little other than water throughout the day. I have maybe 1 soft-drink a month or something ridiculous.

So I think the results might be more dramatic for someone who is chronically dehydrated.

Here’s my before and after pics… I think the main differences are the time of day/lighting… and the beard growth. HA! I’m wearing the same shirt!

I think I actually look worse after! Again, I think it’s lighting and such… I look tired.

Besides my pee being basically clear, there weren’t a ton of observations. I will say that because I usually drank the whole bottle at once, I often felt full (and not always in a pleasant way). It wasn’t bad, but it wasn’t great.

Also, I’m a bit of a believer in the idea of “stretching out your stomach.” So there were times I felt like I was hungrier. However, probably just as many times when I was a bit hungry it was time to drink my water and I didn’t snack.

I think my intention going forward is to drink something like 4 bottles (96 ounces) per day. It will make me less a slave to it and probably have the same results.